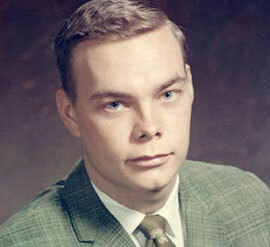 Andrew's high school graduation picture from 1967. Andrew believed that by his own righteousness and good works, he could develop his relationship with the Lord.

It all began when Andrew was born again at just eight years old. Although he avoided the rebellious phase often associated with adolescence, he believed that through his own righteousness, he could develop a relationship with the Lord. Then, on a Saturday night in 1968, everything changed. Andrew realized he had fallen into the bondage of legalism and began confessing his self-righteousness, expecting the wrath of God to fall. But instead of wrath, God's presence flooded him with love. "God's love consumed me," he says. "When I was at my worst, God's love was the strongest." This encounter changed his life forever and motivated him to follow God's leading in his life. He decided to leave college, even though that meant losing his student deferment. Drafted into the Army and shipped to Vietnam, he served as a chaplain's assistant. Despite how difficult and dangerous things were on the front lines, God used that time to ground Andrew in His Word and begin establishing the course of his life.

Upon his return, Andrew submitted to the call of God to be a teacher of His Word. He and Jamie were married in 1972, and together they began teaching Bible studies. Over the next six years, they would pastor three small churches and complete their family with two sons, Joshua and Jonathan Peter.

In 1976, Andrew broadcast his first Gospel Truth radio program on a little country-and-western station in Childress, Texas. By 1980, Andrew and Jamie had moved their ministry to Colorado Springs. Their vision was becoming quite clear: to teach the truth of the Gospel to the body of Christ throughout the United States and the world with special emphasis on God's unconditional love and the balance between grace and faith. They were fulfilling that vision by traveling to speaking engagements, producing radio broadcasts, and distributing audio cassette tapes, which were provided at no cost to those who could not afford them.

Then God began speaking to Andrew about 2 Timothy 2:2. In that scripture, Paul told Timothy to take the things that he had learned and commit them to faithful men who would be able to teach others. Andrew knew God wanted him to do the same. In 1994, a cornerstone of the ministry was laid in place with the dedication of Charis Bible College - a college committed to equipping the saints for ministry by providing sound biblical teaching and practical, hands-on training. Now the school has grown, and Charis locations can be found in many other cities and countries.

In January of 2000, Andrew broadcast the first Gospel Truth television program on INSP Network. Response to the message was tremendous, and since then, the Gospel Truth has been added to over twenty networks including The Church Channel, Daystar, God TV, and CNL, as well as over 500 television stations around the globe. And the Gospel Truth continues to grow.

But God was putting even bigger things on Andrew's heart.

As the ministry grew, Andrew began looking for a building for the ministry in the United States. AWM had already occupied two buildings prior - one in Manitou Springs and the other on Robinson Street in Colorado Springs. He turned away several other move-in-ready properties for the partly finished Elkton Drive location because of its space. Ever since moving to Elkton in 2004, it has been able to accommodate substantial growth for Charis Bible College (at the time) and in the Communication Services Department, Product Services Department, Television Department, Marketing Department, and the other departments that help make this ministry a success around the world.

Early in 2011, AWM continued to grow in its reach and started to broadcast the Gospel Truth program on TBN, which tripled viewership at the time. That was a huge answer to prayer!

Due to the growth God had given the ministry and Charis student body, Andrew started looking for a larger facility. Through a series of divine appointments and connections, he was able to purchase 157 acres of land in Woodland Park, Colorado. On this land, called The Sanctuary, Charis Bible College Colorado is being built. And so, in January 2014, the school moved to Woodland Park and into their new facility, The Barn. This has been a big blessing not only for the school but also for many of the events held there each year. As this facility is nearly filled to capacity, a new facility on the property is in the process of being built: The Auditorium.

AWM has grown from just one office in Colorado Springs to eleven offices across the globe. The Bible college has also grown by leaps and bounds with currently seventy Charis locations all over the world. By God's grace, the Gospel is definitely going farther and deeper than ever before! For instance, when Andrew first went on television, the Gospel Truth broadcast only had 3 percent coverage in the United States. Now, with recent additions to ministry coverage, the program reaches over 3.2 billion homes worldwide.

The ministry continues to expand as God provides more opportunities and resources to take the nearly-too-good-to-be-true message of God's unconditional love and grace to the world. Truly, the best is yet to come!