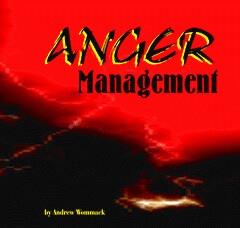 Three CD Album Every person deals with anger. There is no escaping it. But are we dealing with our anger the way God's Word instructs us to? There is a type of anger that is godly, but even the more common, ungodly anger is very misunderstood. It's not people and circumstances that make us angry. In this teaching, Andrew shares truths from God's Word on the subject of anger that are as rare as gold. An ungodly anger is the social norm today. Psychology's diagnosis of the cause and treatment for anger is totally off-base. God's Word tells us all we need to know to manage our anger in a godly way. Godly Anger God gave us the capacity to hate. In fact, it will come as a total shock to many people that God's Word commands us to hate and be angry. A righteous anger is one of our greatest weapons. It's like a shot of spiritual adrenaline. When operating in a godly anger we can accomplish things that are impossible to accomplish without it. We have to stir up this godly anger. Jesus said we can't see His kingdom work in our lives without it.

Ungodly Anger's Source
It is human nature to blame others for our own faults. Most people believe anger is the product of what others do to them. But it's not. It's what's inside of us that makes us angry. That's actually a liberating truth. If people are the reason we're angry, then we can never be free. Satan will always have enough willing vessels to keep an endless parade of people coming our way who will hit our hot buttons. The key to overcoming ungodly anger is to know how to get rid of your buttons.

This teaching on "overcoming ungodly anger" is one of the most important revelations the Lord has ever shown Andrew. In fact, this is the basic thing the Lord revealed to Andrew about himself on that eventful night of March 23, 1968 that forever changed his life. Thousands have discovered a totally new way of overcoming anger through this teaching.

Anger Towards God, Others, And Self
On this final teaching in the series, Andrew gives antidotes for anger that is directed toward God, others, and ourselves. Anger toward God always comes because of false assumptions we have about God ? primarily the religious teaching that God sovereignly controls everything that happens to us. Anger toward others only imprisons us, not the person we are trying to punish. And anger toward ourselves is caused by a lack of understanding of who we are in Christ.
Looking to leave a review? To leave a review you must first be logged in using your AWMPass username and password. Click here to login.