Fear Of The Lord View All CDs English In Stock 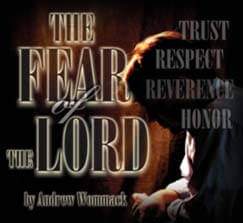 Five CD Album If I was to quote the part of 1 John 4:18 that says perfect love casts out fear, I imagine I would get a hearty "Amen!" from nearly all of you. But if fear is a bad thing, then what do you do with the 300-plus scriptures that speak of fearing the Lord in a positive way?

K173C The Beginning Of Knowledge And Wisdom

What Is The Fear Of The Lord?  Did you know there are over 300 scriptures that talk about the fear of the Lord in a positive way? The Bible even says that Jesus feared His Father God. Listen as Andrew begins by defining the subject.

The Beginning Of Knowledge And Wisdom:  Any knowledge or wisdom that doesn't have God as its foundation is foolish. The fool has said in his heart, ?There is no God? (Ps. 14:1). Can you trust a leader who doesn't fear God?

They Wouldn't Bend, Budge, Bow, Or Burn:  The fear of man is a powerful force that has caused many to bow. Today we call that political correctness, and it's the justification for compromise. Learn what happened when a few refused to bow and instead feared God.

Fearing God = Hating Evil:  What does it really mean to hate evil? What should our response be to the presence of evil, and how does that relate to fearing God? Jesus twice used a whip to release His anger. Why was that the behaviour of a God of love?

No Want Or Lack:  The proper fear of the Lord leads to abundance and prosperity in every area of life. If you're experiencing lack, then perhaps you have not learned the fear of the Lord. This message could change your life.